‘It was minus fifty degrees and I was sitting in a converted wooden goods wagon in the middle of the night in Siberia surrounded by very rough, very drunk Russian soldier types. I was trying to keep my head down and avoid eye contact.  I kept hearing explosions which was rather worrying but it turned out that it was the resin in the pine trees freezing and blowing them apart.  Another time I was in a St. Petersburg night club and at the coat check-in it was rather interesting to see all the 9mm pistols poking out of the coat pockets.’

These are not extracts from a James Bond or Indiana Jones story but the real life recollections of HGPCA member Tony Ditheridge in his quests to hunt, retrieve and ultimately preserve World War II Hawker Hurricane fighters.

So how do you restore a Hurricane ?  ‘Well’ explained Tony ‘it’s not like restoring an old car when you can use personal judgment to repair, replace or ignore corroded parts.  In aviation, if there is any corrosion to speak of, you have to replace.  You can’t just cut a bit out and weld a new piece in.  If a Hurricane has been left outside for the last fifty years all the wood and all the steel tubes and spars will need replacing.  Some of the heavy forgings may be re-usable but once you remove the corrosion, you have to have them stress analysed and approved before re-use.  The saving grace is that all of the joint plates and complex brackets that hold it together are made from stainless steel and once cleaned up are usually perfect.  There are thousands of small parts that are re-claimable plus hopefully the engine and often things like the propeller hub, oxygen tanks, instruments etc.  Most importantly we always try and preserve the seat, the controls and rudder pedals because they are the parts that the pilot touched when he flew the plane and shot down the enemy.  The best percentage we have re-used was about 65% on a Hurricane retrieved from India.  It was uncrated and re-assembled in 1951 and parked at the back of a college, presumably as an instructional airframe, where it remained until 1994.’

Of the 14,500-ish Hurricanes built between 1937 and 1944 just eleven are flying today, seven of which were meticulously rebuilt by Tony’s company, Hawker Restorations who are currently restoring two more.  Sitting behind his red leather topped desk in his photograph and reference book laden office secluded private airstrip near Cambridge.  Tony told me ‘there are still plenty of Hurricanes left but they are often in desolate inaccessible places.  About 3,000 were sent to Russian during the War and most are still there.  There are huge lakes in Siberia which froze in the winter.  Pilots in difficulty would land on them but in the Spring when the lakes thawed, the aeroplanes sank.  The freezing cold fresh water and sit has preserved them very well.  We pulled out a Messerschmitt ME110 and it was still covered with paint, the guns were armed, the air bottles were still full and the undercarriage still worked.  Getting them out of these places is fraught with problems and then when you do, the cost of re-building them is enormous.  Come, I’ll  show you what I mean.’  With that, we strutted off to a large grey hangar, inside of which were the skeletal airframes of two Hurricanes and alongside, ready to be installed, a pair of enormous Rolls Royce engines. 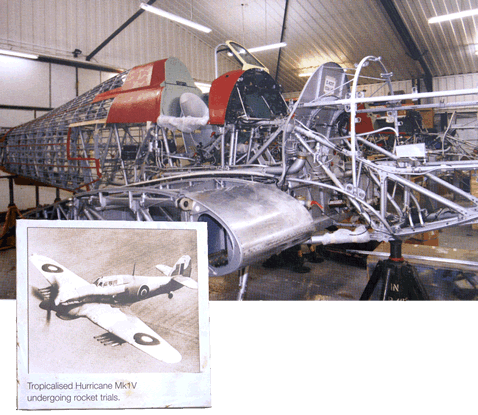 My jaw dropped.  I had always been under the impression that the Hurricane, with its doped linen covering, bolted together tubular steel frame and plywood cockpit, was a fairly simple and basic aircraft having been more of an evolution of WWI bi-plane technology than anything new, radical and exciting like the Spitfire, with it sexy, slinky looks and all metal monocoque construction.  How wrong can you be ?  What lay before me was an engineering marvel made up of thousands of perfectly machined components, bolted, riveted and glued together with incredible accuracy.

Tony explained that the Hurricane was designed to be assembled fairly quickly by relatively low skilled people but the manufacture of the parts was very time consuming.  The components for the Spitfire were easier to make but it was a far more difficult aircraft to assemble.  The Hurricane was also far more tolerant to damage than the Spitfire because enemy fire would often pass straight through the fabric and tubes without exploding and any such damage could be more easily repaired in the field. 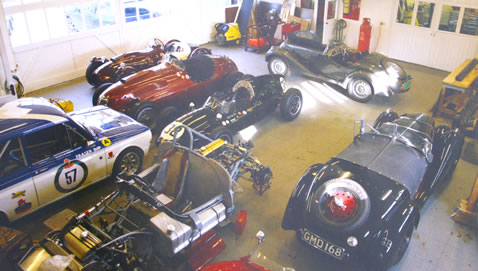 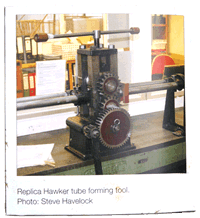 When Tony hit the half century, spurred on by his motor racing friend, John Harper, he decided to try his hand at Historic Formula For in a Lola T200. ‘That was absolutely mad.’ he recalls. He also bought a Cooper Monaco and competed in the BRDC Sportscar series, which he says was ‘good racing, good fun and wall to wall parties.’ He then added a ’58 Cooper T45 and jointed the HGPCA. ‘That didn’t get off to a good start. In my first race at Silverstone I spun on oil and hit the wall, pushing my tibia through my kneecap. But after that, thankfully it went smoother. I really enjoy racing with the HGPCA and I’ve raced at some great circuits like Brno, Most, Imola, Spa and Mogaro but my favourite is Dijon, which really suits the Cooper. It’s challenging and rewarding when you get it right.’ Another turn of events presented yet another opportunity. An ERA was very badly damaged in an accident at Imola and required some expert engineering to sort it out. The local owner knew the quality of work that Tony and his crew turned out and entrusted the rebuild to them. He subsequently asked Tony if he would look after his other racing cars. That got Tony thinking. Along with preparation and maintenance of his own cars, why not start a race shop ? He told me ‘I knew a very competent young engine man and engineer called Peter Russell who wanted to work more with historic racing cars. He agreed to come on board and we formed Hawker Racing at the end of last year. We already had lots of woodworking, metalworking and engineering expertise on site and we had the room, so it made perfect sense. We want to keep it small and friendly with a few good clients and will specialise in Bristol engine cars.’ Tony certainly lives a full and active life but ‘Is there still a Holy Grail ?’ I asked. ‘Oh yes. I want to build a Mosquito. There are none flying and I really think that there should be one flying in the Battle of Britain Memorial Flight alongside the Lancaster, the Spitfire and the Hurricane. Technically they were unique, they were faster than a Spitfire, carried a huge amount of ordinance and they were iconic in their design. There are plenty about bit it all comes down to money. I reckon it would cost £3.5 to £4 million to build one.’ Finally, I asked him what a Hurricane is like to fly. To my astonishment he replied ‘I’ve never flown one. I have had the opportunity but being really honest, although I have flown about fifty different types of light aircraft including many aerobatic aircraft, I wouldn’t trust my experience to fly a Hurricane, And now, at my age, I don’t really want to because I think it would put me under huge pressure. These days, I get more fun out of racing my Cooper than I do flying !’ 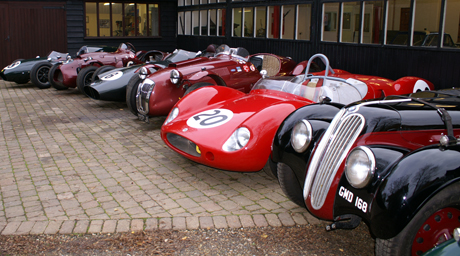 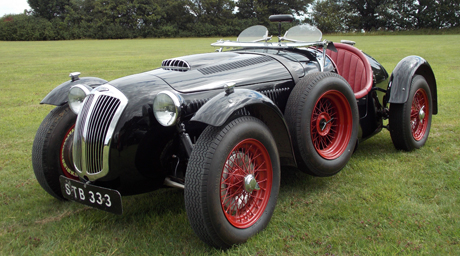 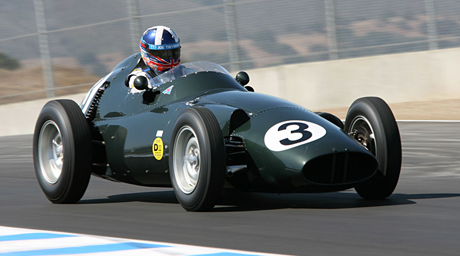 Words : Steve Havelock ‘It was minus fifty degrees and I was sitting in a converted wooden goods wagon in the middle of the night in Siberia surrounded by...